The I CAN Chronicles III – Anna McMahon

The next segment of our voyage spanned 1,200 nautical miles from Nassau to Antigua.

What we forecasted to take about four days ended up taking nine, and the trip was nothing short of an adventure. At this point, the crew aboard Wisdom included Steve, the captain; Alex, the first mate; Cesar, the engineer; Robin, the cook; Tyler, the dive master; and myself, the deck-stew. We had high hopes for this leg of our journey, as it would be the first time we sailed together as a crew—many of us are learning how to sail in the midst of this expedition—so Steve and Alex taught us the basics of sailing: how and when to tighten the sheet, when to hoist certain sails, proper watch protocol, and eventually, how to tack.

At the very beginning of our trip, we enjoyed calm seas as we were making our way out of the Bahamas and we were even joined by a pod of dolphins who swam along the bow of Wisdom for a few miles! By sunset we were well off the coast of Nassau and officially on our way to Antigua. Days at sea are broken up by watch periods; so, the crew is split up into groups who are assigned a watch schedule. Therefore, each team is assigned a morning, afternoon and night watch on a rotating basis. 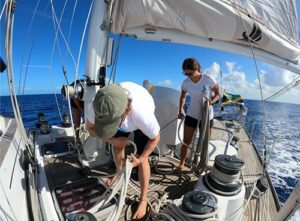 Alex and Anna tidying the deck after adjusting the main and genoa.

The crew constantly adjusts our sleep schedules between each watch and when each member is off duty, they’re free to spend their time how they please. So, crew members would be napping, socializing, watching Netflix, reading or cleaning between watches. Robin, of course, was still cooking three meals a day, but this time less elaborate, as keeling over does not permit for fancy spreads. Cesar was busy making sure the boat was running properly and Steve would be on standby if we had any questions regarding navigation.

We enjoyed a smooth departure in the protected water of the Bahamas, but experienced rougher seas as we entered the open Atlantic. It was an exciting trip, as we were putting our skills and knowledge to the test in a new environment. The sea and the winds have a way of keeping us on our toes and this voyage was no exception. We underwent a number of squalls on almost a nightly basis and had to adjust our waypoints a few times due to tropical storm Fred. As it made its way north from Barbados, we elected to head straight south instead of hugging the northern coast of the U.S. Virgin Islands. By maneuvering south, we lengthened the duration of the trip, but it was much easier on Wisdom and the comfort of the crew. As we continued south, we were hoping we’d skirted outside of the tropical storm and were gratified when we caught heavy showers without any severe winds or thunderstorms after passing the U.S. Virgin Islands. Once it was safe to continue towards Antigua, we cut northeast towards our final destination.

Cesar on watch at the helm as the sun set over the U.S. Virgin Islands.

At this point, the duration of the trip had changed numerous times and it was turning into a mental test. By changing the date of arrival, we were forced to realign our mindsets to accept that our expectations probably would not align with what would eventually unfold, requiring not just patience, but the ability to accept that we were not always in control and that’s okay. While we may have wanted to take the quickest route to Antigua, we knew it would be safer and more comfortable to reroute in order to be protected from the Atlantic, so we cut in and south, away from foul weather and rougher seas. 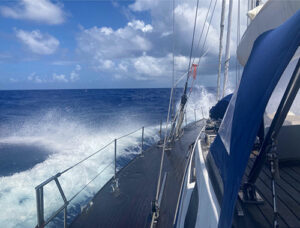 Wisdom carving through waves in the open Atlantic Ocean.

While this could definitely be called the home stretch, we tacked the whole way to Antigua—so it took multiple days. Tacking is the practice of changing direction by crossing the bow upwind in order to catch speed as wind comes and goes. Instead of heading in a straight line towards the final destination, the sailboat zigzags back and forth to harness the wind at its maximum potential until arrival. And the winds are constantly rising, falling and changing direction, so we learned to jump to action whenever the sea called for adjustments. As we made our way towards Antigua, we learned how unique living on a sailboat is compared to other vessels. It was a constant balancing act of trying to stay upright during the simplest of activities. Even something as easy as reading feels like a workout after an hour!

We fastened our lead cloths, clipped into our safety harnesses and adjusted to life at an angle. At one point, we couldn’t stop laughing because we were keeled over so far and it was so windy that our dinner would fly off our forks before we had a chance to eat it. And one morning, after a 3 to 6 am night shift, the sun rose and illuminated the cockpit—only for me to realize there had been a dead flying fish sat next to me through the night! It was often the most ridiculous things that made us laugh the most.

The crew also had lots of time to bond during this trip. There are many perks to life on Wisdom, but one of the biggest is the opportunity to develop relationships with each member of the crew. It’s one thing to live with your coworkers—you get to know each other extremely well, extremely quickly—but it’s another thing to do it in the midst of a situation that didn’t go perfectly to plan. You learn the best, the worst and everything in between. But that’s life on a boat! By having such experiences together, our bond is that much greater and we work that much better together.

Anna and Robin on watch after undergoing a squall on day three of the voyage.

By the end of the trip, the crew had a much stronger grasp of when to sheet in and out, hoist certain sails over others and navigating on our own. It was exciting to feel so much more confident making calls on our own and be that much more comfortable helming. And we underwent so many squalls that the idea of facing them in the future is much less daunting. If anything, this trip elicited a new level of confidence and joy for future journeys—if we can make our way through our trip to Antigua, who knows what else we’re capable of conquering.

We docked at Falmouth Harbor Marina after nine days of sailing and docked by 10 am on Thursday, August 12th. The following stay in Antigua would consist of maintenance, exploring and giving back to the local community.