The I CAN Chronicles VI – Anna McMahon 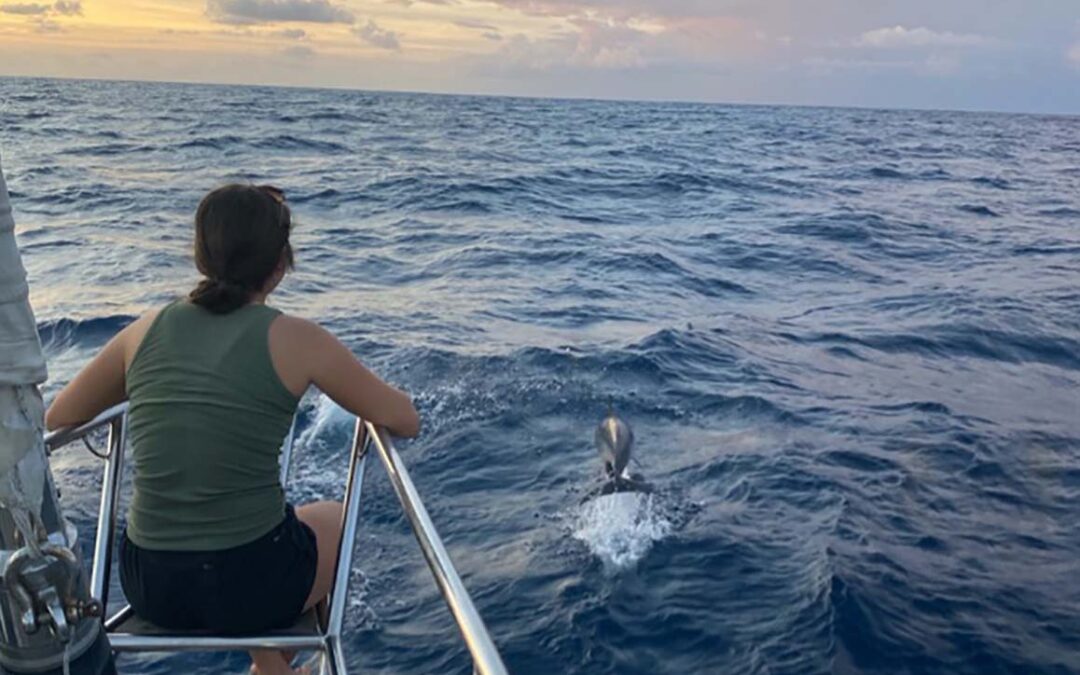 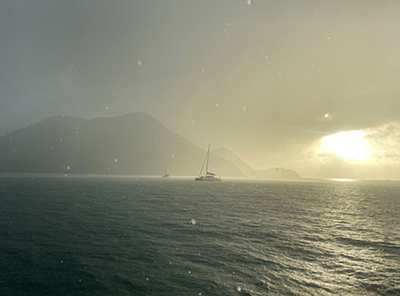 Gearing up for our passage from St. Lucia to the Bahamas, we tidied the deck and salon, lashed down anything that could potentially be thrown about and prepped meals to reheat underway. The trip would be approximately 1,400 nautical miles and we expected it to take about a week. We left our dock and anchored in Rodney Bay to await sunset before setting sail. Before we knew it, ominous storm clouds were looming in the distance as they slowly made their way across the bay. The sunset was incredible with soft pink and orange pastels, but short lived, as the clouds encapsulated the sky and opened up to begin pouring down buckets of rain. But foul weather wouldn’t delay our departure schedule, so we lifted anchor and set sail into the night. Lucky for us, Steve’s direction sailed us out of the storm and into a beautiful starry night.

The following day was sunny skies and fluffy clouds–long gone were the crushing storms of the night before. It was incredibly roll-y, as the waves pushed us from our starboard side. The day was filled with lots of reading, snacking, napping and we were even joined by some animal friends! Kylie and I spotted a pod of dolphins swimming and swerving along our port side beam. We were pumped–second day of the passage and already dolphins, it’s hard to beat! We also were joined by a couple frigates as they coasted alongside our Mizzen. We closed the day with another breathtaking sunset and hoped for smoother seas. 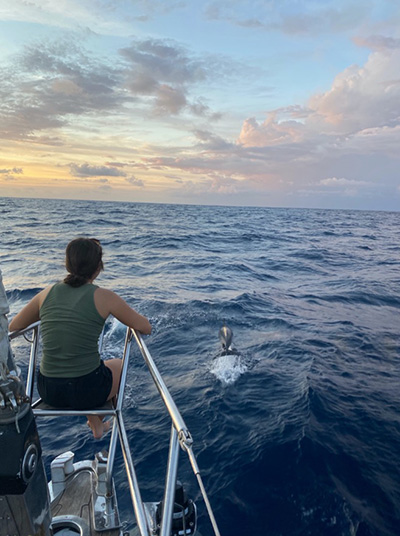 Anna sitting at the bow as dolphins leapt through the waves.

Day three felt like a gift after the first two days of roughness, anyone that was feeling queasy from the rolling waves was granted with calmer waters and more comfortable conditions. This day was cool and windy–warm enough to where the sun hugged our backs, but cool enough to where we didn’t have to shield from the roasting heat. By this time, we were all into the rhythm of the sleep schedule and spent quite a bit more time all together on deck. At one point, we spotted another pod of dolphins a few points to our starboard bow, and they made a beeline for Wisdom. We cried out in excitement and rallied the whole crew to catch a glimpse of the beautiful creatures while they soared through the waves. As we continued en route to the Bahamas, we sailed past the mountainous southwest coast of Puerto Rico and made our way through the Dominican Republic/Puerto Rico Pass. Around midday, a few butterflies made their way out to our boat and flew alongside us for the rest of the day–it was incredible! We were shocked to see them so far off the coast of the nearest island. And then, as the sun melted into the horizon, another pod of dolphins leapt in delight at our bow. As if we’d never seen dolphins before, the whole crew went running to the bow and awed as they flew through the blue and belly flopped in unison before our eyes–it was like nothing I’d ever seen before. We celebrated a beautiful and eventful day sharing stories and feasting over homemade jambalaya.

The fourth day of our passage was the epitome of what I imagine being stuck out at sea to be: unrelenting heat and neither a cloud in sight nor a lick of wind: just you, the sun and the wild ocean. While unappealing to some, all you really need is a bimini and lots of water to get you through. The waves were so calm and the weather was so consistent that the day felt twice as long as the previous. It was a reminder that the ocean is just a massive, blue desert; when you’re out on the water, it’s just you and the elements, and if the sun is beating down without a hint of wind, that’s just the way it’s going to be–and day four was exactly that. We thought maybe we’d see a whale during the day, as the conditions were ideal for whale watching (there wasn’t a lot going on for it to get lost in), but unfortunately, no whales were sighted. However, our good friends–the dolphins–joined us yet again! Seeing dolphins out in the wild never gets old. We finished off the night with Alex’s homemade curry and (not homemade) Ben and Jerry’s ice cream. 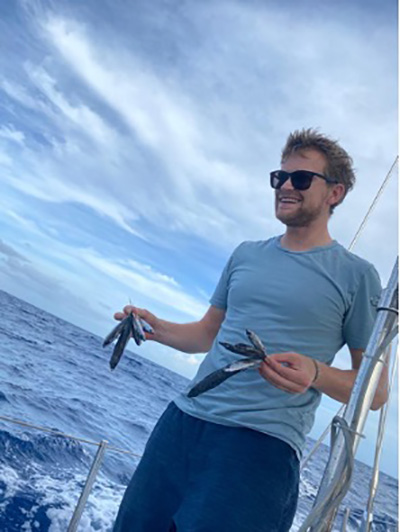 Alex laughing just seconds before tossing the dead fish back into the sea.

Our fifth day of passage was closing in on the home stretch, as both Haiti and Cuba came into viewing distance. We were back to bigger waves and high winds with cloudy skies signifying squalls in the distance. Around midmorning, we sailed through the Windward Passage and passed a wall of rain on our leeward side. The day was consistently grey and the waves were consistently rolling. Lucky for us, we were never hit with rain, but got the chance to watch the storms from afar. More birds decided to join us, but instead of soaring alongside our Mizzen, they elected to take a much-needed break from all that flying and parked on our spreaders–which, much to our dismay, led to a decoration of bird poop on the deck. Another thing we often encounter at sea is flying fish landing on our deck. We usually don’t hear them or see them until it’s too late, and due to the large waves and heavy wind, they littered our deck. So, Alex, Kylie and I had the lovely opportunity to pick up an assortment of dead fish and fling them back into the ocean–riveting stuff. There was quite a bit more traffic as we sailed along the coast of Cuba, and as day faded into night, our fellow seafarers sprinkled the horizon with their navigational lights.

Waking up to the sixth day of passage, Kylie and I were on 3am to 6am watch and were delighted by the most beautiful sunset I have ever seen in my life. The dense, fluffy clouds adorned the sky as if it were a renaissance painting and it was a magical start to the day. 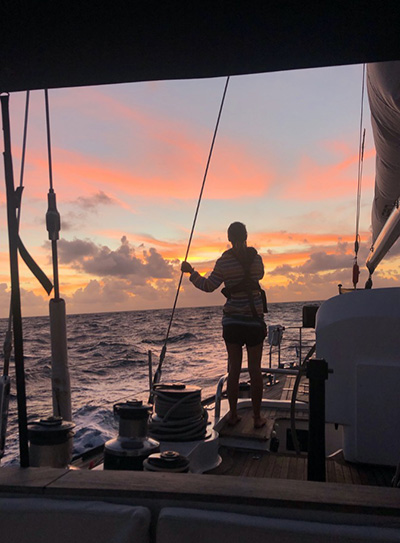 Kylie on watch as the sun rose over the Caribbean Sea.

We entered into the TSS, or transportation separation system, which is basically an organized waterway where vessels have to travel along the right side of the narrow channel and there is a ‘middle lane’ where you’re not supposed to enter. There are a number of other rules seafarers are to follow when sailing through a TSS, but that’s basically the gist. And there are a ton of TSS’s around the world, this is just one of them, due to the narrowness of the channel and how quickly the depth goes from incredible deep, to incredibly shallow. We finished off the night with more jambalaya and discussed our favorite actors (we came to the conclusion that Harry Styles in Dunkirk is not a sufficient answer).

On our final full day of the passage, day seven, we sailed north through the Bahamas. We were greeted by the calm, relaxing blue and a cooling breeze. As light set to darkness, we awed at the decorated night sky and even caught glimpses of shooting stars through the night. The following morning, we arrived in Freeport, Bahamas and awaited our delivery captain for a short and sweet passage back to the States.