The I CAN Chronicles V – Anna McMahon

Our passage to St. Lucia marked the end of a wonderful 3 months based in Falmouth, Antigua. Although we were sad to leave such an incredible place, where so many meaningful connections with the community around us had been made, the prospect of a new island filled us with excitement. For the passage, we had the privilege of having Troy, a videographer, join us to capture some of the magical moments you experience whilst underway. Steve and the crew put up the Mizzen and Genoa for the duration of the

journey capturing the wind between the islands. Leaving at midday meant we got to witness another glorious sunset over the uninterrupted Caribbean Sea. Troy with his incredible drone flying ability managed to capture the beauty of the scene from aloft, which included taking off, flying and landing the drone from a moving boat! As night settled in so did we into our watches as we wouldn’t arrive for another 18 hours. Approaching St Lucia, we were treated to a heavy downpour, which we soon learnt to become familiar with as these occurred each morning for our stay. The rain didn’t discourage our excitement on our final approach into this new country.

Our first couple of days were truly about finding the lay of the land in St. Lucia. Oh! What a stunning island this is, the closest one can come to Jurassic Park without the dinosaurs, mountains climbing high above into the clouds that plunge down to the crystal blue waters surrounding the entire coast. Hairpin roads that make you feel like you’re on the edge of the world staring out 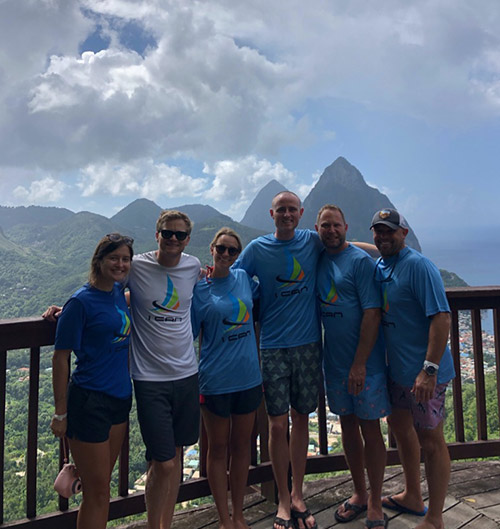 (Left to right) Anna, Alex and Kylie with visitors Jackson, Jason and Devlin at a lookout over the town of Sufrière and the Pitons.

into the rainforest. Waterfalls greet you on every road in the south, some with the ability to swim underneath, others multicolored from the different minerals in the volcanic rock beneath. The smell of sulfur hangs in the air reminding you of the great presence and life of the island around you. The days after our arrival really allowed us to experience all that St. Lucia had to offer from the Botanical Gardens, to waterfalls and witnessing the mightily impressive Pitons. Don’t worry we saw more than them in the coming weeks.

After a couple days sadly, Troy had to return home to the States, but it was not long before our next visitors arrived. First came Devlin, followed by Jackson and Jason. Our crewmate, Anna, also rejoined us after finishing up courses in Fort Lauderdale.

Wisdom was docked at Rodney Bay Marina, which is located in the northernmost region of the island; lucky for us, most of the land-based excursions are in the south of the island, so the winding drives down the island were a two-hour glimpse into the sights, sounds and smells of St. Lucia. For the majority of drives up and down the country, there are only a few main roads, so if you’re making the trek, it’s the same exact route every single time–so traffic can be brutal. But it’s all part of the journey! As we laughed and sang to songs of different eras, countries and languages, we inched through the capital, Castries, gazed off the coast of Canaries, and awed at the bamboo and banana trees that filled the rainforests and cascaded down the rolling terrain. And arguably the best part? At the end of the road trip, you’re gifted with what can only be considered an awe-inspiring view of St. Lucia’s prized Pitons: two wildly rugged mountains shooting out of the Caribbean Sea. 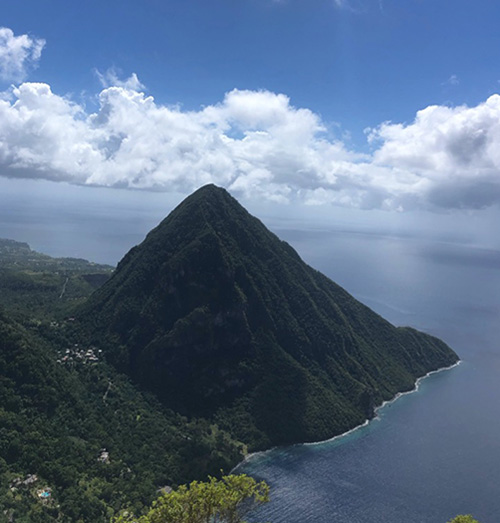 View of the Gros Piton, from the summit of the Petit Piton.

It’s always exciting having visitors on board, as it brings a fresh, new perspective to our day-to-day explorations. On our adventures around the island, we traveled with Devlin, Jason and Jackson to the inside of a volcano, basked in sulfur springs, snorkeled in crystal clear waters and scaled the Petit Piton. There is something uniquely special about traversing through rainforests and climbing mountains, but doing it with friends is an experience like no other. The memories that are built through the shared moments of curiosity, exploration and adversity is priceless. As our rattling car wound its way up and around the lush mountainside, we awed at rainbows, peered down on fluffy clouds and sloshed our way through rain storms. One thing that always kept us on our toes during our time traveling around St. Lucia was the constant change in climate. We’d wake up to a surging rainstorm moving swiftly across the bay, only for the sun to peer through the clouds and evaporate the moisture from the deck. Then we’d get ready for a hike trekking through the heat and humidity, but then get to the top of the mountain and clouds would start sprinkling rain showers. Getting back into the car we encountered storms crushing onto the pavement, and once we cruised our way down the mountain, it was already hot and humid again.

During the work days, we spent our time researching and testing potential excursions for the coming programs. We also sewed a patch onto our Genoa, had a portion of the hull painted, met with local organizations and planned for future conservation projects. We welcomed aboard our new engineer, Christian, who would help with the passage back to the States and stay on as Chief Engineer for the next few months. 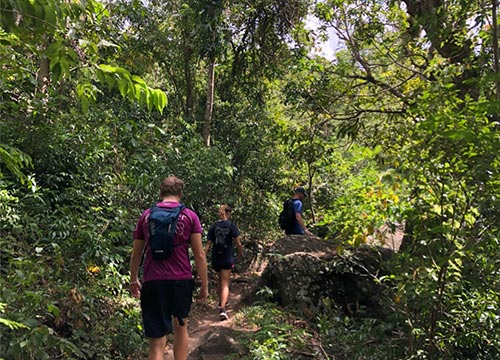 Alex, Kylie and Christian hiking through the rainforest at the base of the Gros Piton.

We finished off our time in St. Lucia by celebrating Thanksgiving with the crew–we cooked up a full spread with turkey, mashed potatoes, stuffing, lots of vegetables and Yorkshire puddings. (Steve and Alex had to include a little English influence, of course.) We are so lucky to have a crew that we feel has become our own little family. The ups and downs of life at sea are some of the most binding experiences and we often don’t realize how much we’ve grown together until we look back and reflect. Thanksgiving is always such a nice reminder of how lucky we are to be surrounded by those that we share the big moments with, as well as the small.

Although we spent almost an entire month in St. Lucia, the time flew by and before we knew it, we were packing up and prepping Wisdom for her sail to the Bahamas.